When you work at a summer camp there are tons of opportunities for spontaneous adventures. And this past week has certainly been full of them. Just last Friday night, several of us headed down to Grand Rapids for the evening. A peaceful, fun evening slowly evolved into a night I will never forget…

I tried sushi for the first time (that took some serious courage), ate the spiciest dish of Pad Thai ever (probably burned a hole in my esophagus), acquired a blister ON THE SOLE OF MY FOOT from walking all over the city (note to self: comfort over cute), got pulled over for following the GPS when it told us to make a U-turn (A: I wasn’t driving, B: sometimes a GPS will lie to you), and finally, prayed over a woman named Kim.

Let’s talk about Kim for a minute. As we were making the trek back to our cars parked on the opposite side of the city (naturally), a woman stopped us, asking for help. Of course we said yes, but I thought she was simply just going to ask for directions or something. She then proceeded to tell us that she wasn’t an alcoholic or druggie and that she needed help finding transportation to move her son who was in a wheelchair. Kim dived on into the details of it all, which I’ve forgotten, but ended with her asking us for money ($48 to be exact). Now, I gave her all the money I had in my wallet, which only amounted to a single dollar bill; however, I’m still a bit skeptical as to the truthfulness of her story. We liked Kim, she was fun to chat with, but we weren’t completely sold on her story.

Regardless of what we thought of her story, we listened to her. As I was thinking about it, I thought, “who am I to judge her story?” I may never know whether she was being truthful or not, but I do know that I am still called to love her. I pondered this as she kept rambling on, and felt a strong urge to pray for her. When she came to a lull in her story, I asked her name and if we could pray for her. She said yes and we bowed our heads, right in the middle of a sidewalk in downtown GR, and began to pray. Afterwards, we continued to chat for a few more moments before parting ways.

As we were walking away, I continued to reflect on what had just happened. I had an internal struggle of wishing I could have provided more money, but also doubting if the money was in fact for her son. Finally, I reached the conclusion that, regardless of her actual situation, I was still commanded, and wanted, to love her with a Christ-like love. Just because she asked for money does not mean that the only thing she needed was my monetary support.

I feel like we come across a lot of people in life that are asking for one thing, but rather need something else. While we did help her as much as we could financially, praying over her was much more valuable. We met her at where she was and showed her the love of Christ.

Those brief 5 minutes of my life had a rather large impact on me. Sometimes I feel the burden of needing to supply people with what they want, not what they need. First off, I shouldn’t be shouldering that burden, for Christ is the only one that can fully satisfy our needs (Philippians 4:19). Secondly, love can be shown in a multitude of ways, and sometimes that love may not exactly be the type of love that person may be searching for. This may sound a bit confusing, but I guess I’m talking about some “tough” love here. I’ve found that it can be a challenge to speak truth to others; however, I know firsthand that there are times where I just needed to be slapped in the face with a truth bomb. And while it may not be a pleasant experience, I respect those who have the courage to love me in a way that I need and which makes me a better disciple.

Now, I’m not saying we should have rebuked Kim or asked to get to the bottom of her story. But encountering her made me more aware of what it looks like to really love people with a Christ-like love, not a worldly love. I’m so thankful for that moment of reflection, for from it flowed an understanding of meeting people where they are at, whether it is a woman on the street, a friend, or a camper. I hope and pray that Kim left us feeling uplifted and at peace, knowing that there is a God who loves her unconditionally. 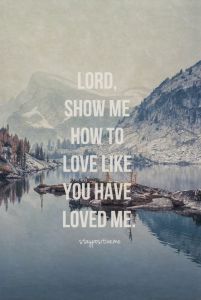 One thought on “Along Came Kim”